A River Runs Between Us, But It Doesn't Have To

By John W. Fountain
I see brother turn against brother, Black man against Black man. Witness this perennial crabs-in-a-bucket mentality in which we continually cannibalize each other here in America in the streets, in public pages, on social media in various venues--entertainment, political and otherwise. And my mind drifts back to Africa, where centuries ago brother sold brother into slavery to the European.
I see us slaying each other today, by words and misdeeds, by the tongue and by gun, leaving a carnage of strange fruit in Urban streets. Divided by the self-hate rooted in Africa, where Africans slew Africans, instigated tribal wars to capture indigenous men, women and children in exchange for guns, ammunition, liquor, for trinkets and a semblance of power.
That in their short-sightedness succumbed to a sinister trick of white colonizers that in reality led to Africans’ demise. That destroyed kingdoms and fueled the largest forced migration ever known to man.
In Ghana I stood in Assin Manso’s Slave River, where African slaves bathed in gold-flake laden waters before the final bloody and agonizing leg of their journey to slave castles, where they were held in putrid, unbreathable dungeons filled with urine and feces above which rested the sacred Church of England. 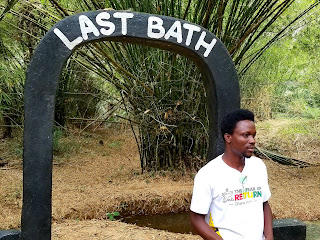 And what was clear to me inasmuch as the White man had come to Africa with a plan to export black human gold as slaves, the Black man—the African—all along was complicit, a willing participant, a co-conspirator.
That does not absolve the white man of his evil. Nor does it require that I pretend to be blind to the truths of history no matter how uncomfortable the difficulty in wrestling with them. For it is written that you shall know the truth and the truth shall make you free.
The truth is: the white man cannot kill us. But we can kill ourselves. And neither our fate nor our future have ever been irrevocably tied to our oppressor’s racial hate or his sense of superiority over the Black man. Both have always rested in our own hands. I inhale this truth as I reflect on the lingering divisions between us that only serve to destroy us.
Email ThisBlogThis!Share to TwitterShare to FacebookShare to Pinterest
Newer Post Older Post Home