A submission of three of John W. Fountain's columns won the 1st Place NABJ "Salute To Excellence" Award for column, newspapers under 100,000. One of them was a nostalgic piece about my beloved K-Town neighbor, Mr. Newell.

Many thanks to editor Paul Saltzman for submitting Fountain's work. He is humbled for the National Association of Black Journalists bestowing upon him this honor.

A Fulbright Scholar's Journey: Dispatches From The Motherland

Imagine... From Cape Coast Caste in Ghana to the Middle Passage

What About All Of America's Daughters?

The disappearance and death of Gabby Petito, 22, is a great tragedy and loss, and my heart goes out to her and her family. We should all mourn for Gabby. For this is an American tragedy.

But we should equally mourn for Reo-Renee Holyfield. For Gwendolyn Williams, Nancie Walker, and the mostly 51 African-American women in Chicago slain from 2001 to 2018, and discarded like trash, set on fire or mutilated and whose murders remain mostly unsolved.

Theirs is equally an American tragedy. Like the stories of thousands of missing and murdered women across America whose stories don't get the national—or local—press' attention the way stories of missing or murdered white women do.

It is a glaring tale of great disparity, one in which the American press, which purports to be fair and equal and a purveyor of truth, fairness and democracy ignores the stories of so many of America's daughters slain, missing, stolen... Missing are the stories of America’s daughters of color.

That much is clear even in the story of the Unforgotten 51, and untold thousands of missing women of color nationwide.

This story keeps cropping up. Every time a white woman or girl goes missing. Then the disparity glares—at least for those of us in communities of color...

Theirs is an American tragedy in Black and white. It is revealing with glaring clarity—a tale of the disparity in the media’s coverage of cases of murdered of missing Black women and other women of color. A real-life tale of the gaping divide in how law enforcement and society at large views and treats their cases, which far exceed the rate of violent crime against white women.

She walked for her--this palpable trail of humanity and collective tears flowing down South King Drive, their chants rising in unison from here and the grave into the warm summer air in remembrance of those Black girls and women no longer able to speak for themselves.

Their voices resounded with a call for closure. For justice. For answers, and ultimately for an end to the slaying of young Black women and girls strangled, suffocated, shot or mangled, their bodies discarded like yesterday’s trash.

They spoke. For those Black girls and women abducted or who suddenly vanished without a trace, like a vapor.

For the dead, they walked. For those whose innocent blood still cries from premature graves.

My Visit To Ghana: Remembrance of Black History Long Before Slavery

Imagine. If the ocean could cry. If the walls did cry. If the sands could speak. If the cells here in Cape Coast would try to tell the tale of blood lost, of tears shed. Of souls dead. Imagine…

These were the words I penned shortly after visiting the former slave castle in Cape Coast, Ghana, in 2007--a hauntingly majestic white stone fortress overlooking the Atlantic Ocean.

Standing on that side of the Atlantic upon this castle, where my ancestors began their shackled journey to North America, staring into waves that lapped at its shores, I was awash in Black history. Moved in ways I had not been before by our story as African Americans, by our journey, which did not begin in 1619.

In City of 'Silence,' Never A Greater Need to 'Say Something'

By John W. Fountain
Silence
Hear the silence
The sound of nothingness,
crashing
like waves
upon this star-kissed city's shore,
in the face of injustice
and poverty
that roar
Silence...
Deafening
Amid burgeoning malevolence
Merciless greed
That leaves
Black lives scattered
Black lives shattered
Listless
In the bitter night cold
Frozen
In drifting now
Souls frostbitten
By Hatred
So cold
So bold
Old schemes
In "The White City"
Where Black dreams
Remain elusive
Privilege exclusive
And voices that challenge
The status quo
So few and far
Between
That silence
now screams! 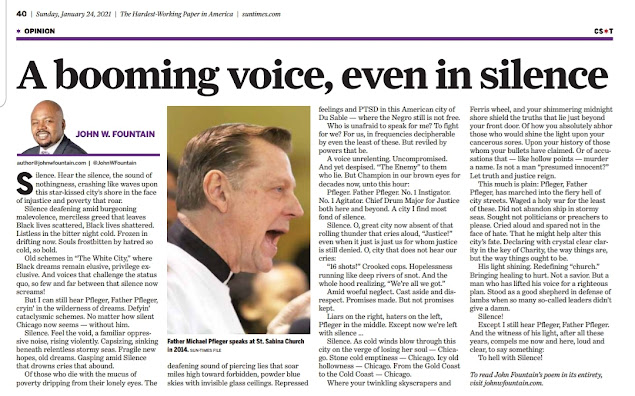