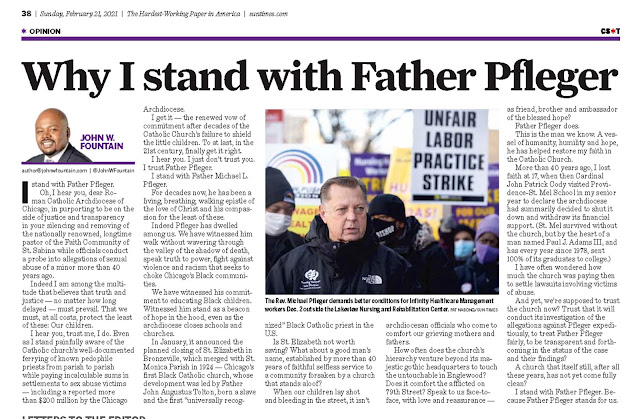 I get it--the renewed vow of commitment after decades of the Catholic Church’s failure to shield the little children. To at last, in the 21st century, finally get it right.

I hear you. I just don’t trust you. I trust Father Pfleger.

For decades now, he has been a living, breathing, walking epistle of the love of Christ and his compassion for the least of these. He has embodied the prophetic voice and zeal of Dr. Martin Luther King and embraced a transformative social Gospel that has the power to renew, restore and revive lives and communities. 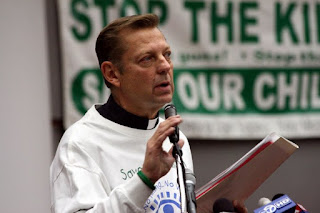 Indeed Pfleger has dwelled among us. We have witnessed him walk without wavering through the valley of the shadow of death, speak truth to power, fight against violence and racism that seeks to choke Chicago’s Black communities.

We have witnessed his commitment to educating Black children. Witnessed him stand as a beacon of hope in the hood, even as the Archdiocese closes schools and churches.

In January, it announced the planned closing of St. Elizabeth in Bronzeville, which merged with St. Monica Parish in 1924--Chicago’s first Black Catholic church whose development was led by Father John Augustus Tolton, born a slave and the first “universally recognized” Black Catholic priest in the U.S.

Is St. Elizabeth not worth saving? What about a good man’s name, established by more than 40 years of faithful selfless service to a community forsaken by a church that stands aloof?

When our children lay shot and bleeding in the street, it isn't archdiocesan officials who come to comfort our grieving mothers and fathers.

How often does the church’s hierarchy venture beyond its majestic gothic headquarters to touch the untouchable in Englewood? Does it comfort the afflicted on 79th Street? Speak to us face-to-face, with love and reassurance--as friend, brother and ambassador of the blessed hope?

This is the man we know. A vessel of humanity, humility and hope, he has helped restore my faith in the Catholic Church.

More than 40 years ago, I lost faith at 17, when then Cardinal John Patrick Cody visited Providence-St. Mel School in my senior year to declare the archdiocese had summarily decided to shut it down and withdraw its financial support. And no matter how much we marched, begged, protested, the Archdiocese never budged—deserted poor Black kids on the other side of the tracks, where this small Catholic school was our lifeline, our refuge, our bridge to a better life.

My class was supposed to be my school's last. But St. Mel survived, without the church, by the heart of a man named Paul J. Adams III, and has every year since 1978, sent 100 percent of its graduates to colleges and universities.

I have often wondered how much the church was paying then to settle lawsuits involving victims of abuse.

And yet, we’re supposed to trust the church now? Trust even that it will conduct its investigation of the allegations against Pfleger expeditiously, to treat Father Pfleger fairly, to be transparent and forthcoming in the status of the case and their findings?

A church that itself still, after all these years, has not yet come fully clean?