Now Available
No Place for Me
Letters to the Church 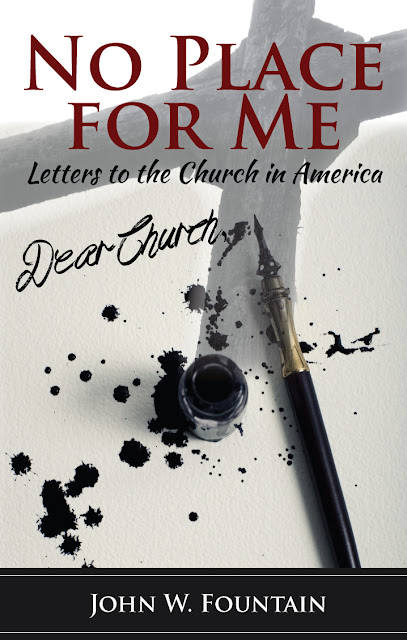 hy do so many men not go to church? Why does the church continue to erect multimillion-dollar edifices in the name of Christ, even in times of economic recession, often building them on the backs of the poor? What is one to do after having been wounded, church hurt or abused in the House of God? Has that Old Ship of Zion lost its way amid the downward spiral of materialism?  Why have millions of Christians in recent years, according to researchers, abandoned that ship? And where do they go from here when their love for God remains hot, and yet, their love for the institution called church has grown cold?
What would drive a Pentecostal son, grandson of a pastor, who grew up in the church, away from the very church he so deeply loves?
All are questions explored here by John W. Fountain in No Place for Me: Letters to the Church. This book was born out of an essay by Fountain that ran in the Washington Post and subsequently in newspapers across the country, drawing thousands of letters from a wide swath of readers, nationally and abroad.
An award-winning columnist for the Chicago Sun-Times and formerly national correspondent for the New York Times and reporter for the Washington Post, Fountain is a professor at Roosevelt University in Chicago. In this book, he raises critical questions about the institution called “the church” and also about how faith is lived in America. And yet, throughout it, he so clearly expresses his love for God and for the church he once knew—a church that years ago, he says, more closely resembled that ideal “church” established by Jesus Christ, purchased by His blood on Calvary.
A true-life narrative sprinkled with letters from Fountain’s readers over the last eight years and his responses, No Place for Me also allows readers to eavesdrop on his conversations with those who have reached out to him—many of them discouraged and deeply wounded by the church and searching for an answer to one agonizing question: Where do we go from here?
Among them are men and women, ministers and deacons, disenchanted theology students, gays who have been disillusioned and disheartened by over-the-pulpit bashing, and countless others who have been broken, belittled, battered or bewildered by the church experience. It includes the voices of people of all races, men and women, the young and the old, and even pastors—some also disillusioned, some supportive of Fountain’s assertions and others angered by them. In the end, Fountain finds along his reflective journey as a writer a place for him after all—a place perhaps for others too who also find themselves wandering in the wilderness of church hurt and deep disappointment.
No Place for Me is more than a window into the impassioned conversation of one writer with his readers. It is a spiritual memoir. This book is honest. It is stirring. And it calls upon us all to challenge, wrestle with and find the true meaning of “church,” to reflect upon and also to renew our faith. It is a moving collection of contemporary “Letters to the Church.” A must read. A word for these times. 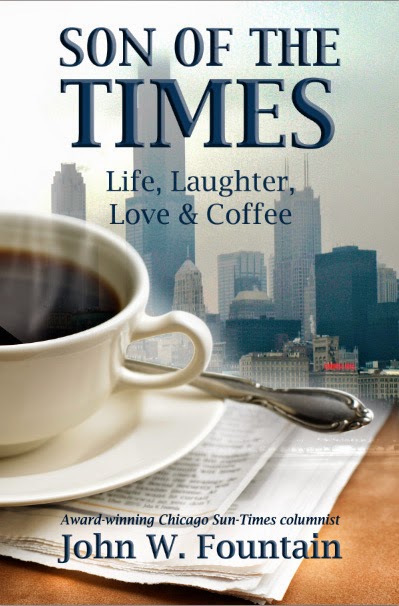 son of the times, award-winning Chicago Sun-Times columnist John W. Fountain writes about everyday life, from the serious to the sublime. He writes about poverty and homicide. About hope and also hopelessness. About the church, faith and religion. About Olympic gold medalist Gabby Douglas and black women’s hair. About education, and parenting. About fatherhood, fatherlessness, and old-school mothering. He writes about community, about an evening commute on the Metra train, about a barber struggling in lean economic times as the clippers buzz inside a timeless barbershop filled with the scent of lilac aftershave.
A weekly columnist, Fountain also writes about riding a Harley, about getting a pedicure, and “the hair of a dog,” even chronicling the conversations of a motley crew of middle-age and old men who are Fountain’s morning crew at a suburban coffee shop he affectionately calls “the roundtable.”
Son of the Times captures a mix of the best of Fountain’s musings as a columnist and also some of his other writings over a nearly 25-year career as a newspaper journalist. At his best, he is a masterful storyteller. His words will make you laugh, think, feel, cry—no matter what your flavor or politics—because his stories, more than anything else, are simply human.
His editor writes: “Fountain writes with intelligence, compassion and eloquence about stuff that nobody in Chicago writes about but should. He writes about his personal struggles with faith and organized religion. This, of course, is a matter of central importance in the lives of so many Chicagoans, but who else in a newspaper — in Chicago or any city—addresses the matter without apology or ironic distancing, if at all? He writes about the world he grew up in—stark poverty on Chicago’s West Side—and about how he rose above, always honoring those who gave him a boost and showed him the way.
“He writes, as well, with wit and humor, about the everyday small stuff, such as women’s hairstyles and hot-dogging professional football players. John’s general approach as a columnist is to mine the personal to find the universal, a rather dangerous form of journalism that works only if done very well. He does so beautifully well.”
Wrote the judges of the Chicago Journalists Association, who, in 2011, named Fountain top Chicago columnist: “His writing is crisp and compelling as he tackles issues head-on, giving his readers a look into his thoughts and feelings.”
Son of the Times is a compilation of work by a world-class journalist at his very best.
A native son of Chicago, Fountain is formerly a national correspondent for the New York Times as well as a staff writer for both the Chicago Tribune and the Washington Post. Awarded the Prestigious Peter Lisagor Award by the Chicago Headline Club for distinguished commentary in 2011 and 2014, Fountain is a professor of journalism at Roosevelt University in Chicago.


You can’t help but notice the white ice on the shore—glossy slick—or the way this city’s skyscrapers kiss the clouds on a winter’s day. I take in the view from one of my favorite perches. It anchors the Shedd Aquarium, sandwiched between old Meigs Field and the lake. I notice a few lovers strolling arm-in-arm along a frosted path and a few apparent tourists posing before the skyline.
It matters not how often I have seen Chi-City from this vantage point. It is simply beautiful—a word I have banned my journalism students from using, believing that “beauty” is better left in the eye of the beholder, best described in vivid detail by the writer and left for each reader to absorb and assess.
Beauty, at least our perception of it, is a lot like perspective and “truth,” which ultimately are filtered through the eyes of our own experiences—something I have long understood as a journalist. It is something that remains at the core of the need for diversity of voice and thought in a democracy, especially in the pages of daily newspapers for as long as they still live.
For it is within the rainbow of our collective ideas—of the cultural and ethnic diversity and life lived in neighborhoods beyond the Magnificent Mile—that my Chicago’s real beauty exists. It is a city about which Carl Sandburg—despite its harshness or shortcomings—penned the words, “…city with lifted head singing so proud to be alive and coarse and strong and cunning.”
As a black boy born and raised on Chicago’s West Side, I saw Chicago—her good, bad and ugly.
At 7, I watched from my third-floor apartment as flames licked the pale, night sky after Dr. King’s assassination, as businesses, hope and the vitality of a neighborhood turned into vacant lots and ash. I have seen poverty running like a river, ventured as a reporter into high-rise public housing complexes hardly habitable for animals. As a newspaper crime reporter, I have seen the toll of homicide in the city, playgrounds wet with blood, witnessed inter- and intra-racial hatred and discrimination.
And yet, I see her mostly as a city rich in history and my own heritage: As a still politically “windy” city, once the headquarters of Al Capone; as the scene of the Democratic National Convention clash in 1968; as the city where Fred Hampton was shot dead by police as he slept in his West Side apartment; as the town where Dr. King marched for freedom and once lived blocks from me on West 16th Street; as the city of Harold Washington, the city that gave us Marva Collins, Oprah Winfrey and the father of Gospel music and that became the adoptive home of the blues, Richard Wright, Operation Breadbasket and Jesse Jackson, Muhammad Ali, Michael Jordan and Barack Obama.
It is a city in which we may not always see eye to eye, but a city in which even the eyes of those considered to be among the least of us is as critical to the prevailing portrait of life that exists here as the perspectives of those who are greatest among us.
As a reporter for many years, I have endeavored to contribute to that picture, often seeking to capture the faces and voices of those seldom seen or heard, believing, as my grandmother, that even insignificant patches, once woven into the fabric of the whole, form the essence of a quilt’s beauty.


That is what I hope to do as a columnist for this newspaper for however long it lasts— here, where the steel screech of the “L,” the clap and chatter of the streets and the wind-whipped cold kissing my face reminds me that there are a million stories in the city. They also remind me that there is no other place I'd rather be a writer.