The Moment When One Finally Realizes It's Time To Move On

This is an excerpt from John Fountain’s forthcoming book:
“No Place For Me: Letters to the Church in America"

By John W. Fountain
It wasn’t that I disagreed with the whole idea of “separation of church and state.” For it is difficult for the “political voice” and the “prophetic voice” to coexist. Indeed I have long believed that speaking truth to power requires a certain distance from the established social and political powers that be. That if a preacher ever climbed into bed with politicians he was well soiled before he climbed out. And that once you had been politically tainted you were likely to develop social laryngitis because more than likely you had been bought with a price.
In my eyes, the affairs of faith--even if sometimes connected to the affairs of “the state”--needed a degree of immunity from political corruption and the trappings of politics: money, power, influence.
The “uncompromising man of God,” that I perceived “Reverend Pastor” to be was what helped draw me temporarily from the waters of religious brokenness to the shores of “Resurrection Church.”


"His words blew me away. It wasn’t his words alone but the sum of my experience with organized institutional Christianity."

But some things changed. I remember distinctly one of the ministers basically rebuking the congregation amid rumblings over Pastor’s foray into politics. I sat there shaking my head at the minister’s pulpit mental arm-twisting that I had experienced at other churches.
In time, inasmuch as I still loved Resurrection, it became evident that the church was too big for me. Crystal clear that one man could not possibly “pastor” so many members.
Clear that some members were destined to get lost in the shuffle. That if and when I died, my pastor likely would not give my eulogy. That my services wouldn’t even be held at my home church.
I felt like a number in a large corporation.
And I understood that if I ever hoped to preach or be on the rostrum of ministers, I would need to have also, even here, a sponsor. I understood that there would be many more political Sunday spiels from campaigning politicians to suffer through.
That the more we seemed as a church to be moving in one direction, the more we seemed to be moving away from another.
I came to see this much less as being the fault of any individual and more as that inevitable devolutionary enigma born out of the DNA of corporatized religion. As the Frankenstein monster created from fusing an organic, non-temple-based religious faith with American capitalistic, profit-driven corporate warehousing. I said as much to my pastor in a letter and subsequent telephone conversation. He tried to explain:
“Do you have a cellphone?” he asked during a follow-up telephone conversation.
“Yes,” I answered.
“Then let me ask you something, John,” he continued. “If you had a problem with your cellphone and you called SBC, would you expect to reach the CEO?”
His words blew me away. It wasn’t his words alone but the sum of my experience with organized institutional Christianity that came to bear in that moment--like the final rush of water that causes the dam to burst.
The last straw, though it left me with no tears this time--only the kind of resolve in the moment of a bad relationship when one realizes it is finally time to move on, or else to live miserably until you die.
That moment when one accepts: I am, perhaps, after all, a square peg in a round hole. And you know what? That’s okay.
At least I will no longer allow myself to be squeezed, squished and reshaped. Nor will I try to fit in some place where I feel so out of place.
I hung up the telephone that day, knowing that with “church” I was completely done. 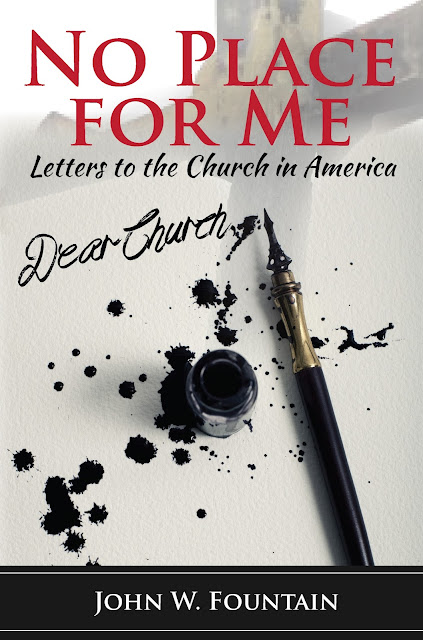 Buy A Signed Copy Directly From the Author

For Large Quantities and Publisher's Bulk Discount
Contact: Author@johnwfountain.com
Or at 708-580-6408