The most sincere question on how to stop the killing: Do we have the will?

By John W. Fountain
If we can find Saddam Hussein hiding in a hole in the desert. If we can hunt down Osama bin Laden, track him to a secret compound, slip undetected through another country’s air space and extract him never to be seen or heard of again.
If we can thwart terrorists worldwide, pinpoint their movement and send the message loud and clear that they and any who protect them can run but surely can’t hide. If we can declare war on those who have declared war on the sanctity of life in America, and who show blatant disregard even for women and children. If we can put a man on the moon… Why can’t we stop these homegrown thugs who amount to urban terrorists?


CHILDREN ARE OFF LIMITS from 40 Acres and a Mule Filmworks on Vimeo.


How many more children must be slain in the street before we arise to end this scourge that has transformed neighborhood streets into war zones?
How much more bloodshed of the innocent, or sordid and sorrowful details of another life senselessly taken must we endure before we say as a society that enough is enough? How many more mothers have to bury their child?
As a former crime reporter who has written over more than two decades the public epitaphs of far more children than I can remember, I have more questions than answers:
Where is the “faith” community amid this ongoing slaughter? Why is the church’s overwhelming focus on raising offerings and on building bigger sanctuaries rather than on raising better communities and building lives? Why does the church at large not mourn? Awaken from its slumber?
Why don’t police round up these young thugs, seize their guns and send the message that there will be peace in the streets, or else no peace where they sleep?
How does a so-called gun turn-in program for cash gift cards make the streets less volatile—safer—when no self-respecting thug is ever willingly going to lay his weapon down? What a sham. 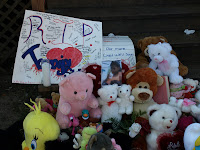 Where are the publicity-grubbing, so-called community leaders when the light of media cameras has faded? Where is the commitment of politicians beyond emotional words spoken in the moment of tragedy?
Where are the fathers of these mostly young black men engaged in thuggery, debauchery and terrorism? Why do their mother and grandmothers protect them, accept the spoils from their drug dealing, run to their defense upon their arrest for some heinous crime and stare into the camera and saying, “My son is a good boy.”
Stop lying. No, he isn’t.
He’s a thug. In some cases, he’s a killer, a menace to society, a domestic terrorist who is as great a threat to life in America as any terrorist ever was and ever shall be.
I am sick and tired of writing stories about little boys having their brains blown out while watching cartoons. Of writing about little girls being shot while jumping rope, or being pushed by their mother in a stroller, or while selling candy. So sick and tired.
When will it stop?
And after all these years, I finally know the answer. It’s simple: When we muster the collective will—moral, ethical and political—to make it stop, by any means necessary.
The only question: Do we have the will?

CHI-RAQ Trailer from 40 Acres and a Mule Filmworks on Vimeo.